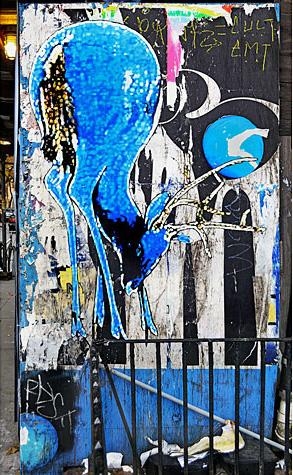 I became captivated by street art sometime in the late 1990s, especially wheat-paste works that were pasted onto New York walls. As I watched and photographed, I saw how works were rapidly and continually pasted over by other artists as well as worn down, ripped off and written over by other artists, would-be artists, billboard purveyors, city officials or passers by. The resultant juxtapositions and layerings were sometimes purposeful, sometimes serendipitous, sometimes serious and sometimes playful, but always in motion so that the city wall in its entirely kept changing its message.
Eight years ago, I decided to join in this conversation and went from observer to participant by creating work in this public setting. I felt this was a place to combine my interest in the grittiness of the urban environment with my attachment to an oriental philosophic belief that beauty creates courage, increases the vital force and develops a moral responsibility in the viewer. This move also mirrored a shift in my beliefs about the purpose of art in our contemporary society. I had come to believe that as an older artist I had an obligation to work toward the general good by reaching out to a large audience. I began by creating what I felt were hopeful signs of beauty, joy and grace. I adopted the Chinese/Japanese word for heart as my street name.
Over time I developed a series of images based on a vocabulary of metaphors. Many motifs were taken from photographs of my garden fruit, some from drawings. Others were based on work from design sources such as Japanese scrolls and books. The themes of my work are based on universal symbols that are reflected in my life and hopes. Oranges are a symbol of paradise; bees represent a desire for sweetness and the collective group working together. The jewels are a Buddhist symbol of spiritual wealth. The bowl of cherries represents an abundance of happiness. Prayer beads are used by Islamic, Christian and Eastern cultures to connect with the divine, the trees of light represent the connection between heaven and earth. The latest images, the deer, are messengers to the spiritual realms.
While the images (figures) are created in paper by me in a studio, I believe that their real meaning comes from the synergy of their combination with the layered and “in process” backgrounds on urban streets. When I travel to NYC where I have a small studio, I may bring paper figures with me or make them there.
After I arrive I look for interesting grounds where they can be placed. I love the chaos of the torn and ripped posts on construction site fences. I love that I cannot design the background but must depend on what is already there. There are also a few specific sites where urban artists come to place ideas. I have no control over any of these sites and must therefore depend on creating meaning in the moment. Whether on a chaotic torn field or with other artists I try to place the work so that it moves in and out of the other visuals creating a dance of energy between my cut out figures and the ground. I love the fact that a piece many last for an hour, a day or a few weeks before the weather, or a passer by begins to tear it down or cover it up. The pieces in this show are full scale recreations of placements in NYC in the last three months. The blue balls in both pieces are from a series done last summer called “Bounce” on the locations.